If it ain’t broke don’t fix it.

Say something like this to a German and be prepared to be confronted with a cross-eyed, glazed over stare.

Germans are known world-wide for their excellent standards and steady journey to perfectionism as seen in the manufacturing of autos and many other industries, including pure-breed German shepherds. Compromise and settling is not an option. Therefore only the best will do. This mindset is consistent in their breeding and training of quality German shepherd dogs. 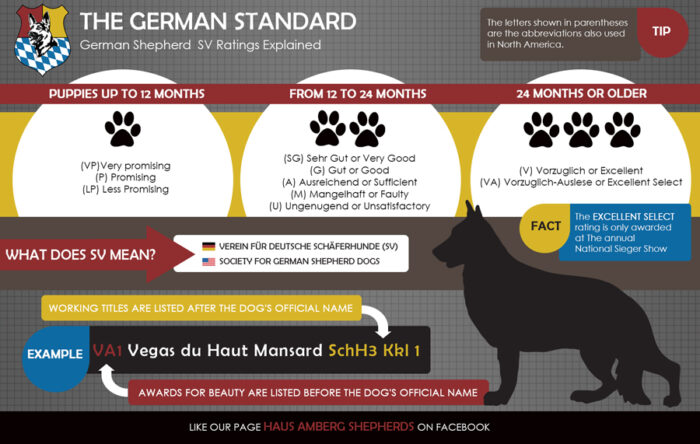 What is the SV?

After the foundation of the SV and this disciplined system of breeding was established, the German shepherd dog was bred with the ultimate goal of creating a working dog inclined to high achievements. This description refers to the physical constitution, as well as the traits and characteristics of the shepherd.1

Take a look at the German Shepherd Dog breed standards detailed by the United Schutzhund Clubs of America.

It’s all Greek to me! When searching for a quality, pure-bred German shepherd dog, many may take a look at the long sequence of letters before and after the dog’s name and get quite overwhelmed. To fully understand the SV ‘rating’ system associated with the German shepherd, a little bit of background on how the judge comes to his/her decisions is needed. These ratings can change depending on the age and qualifications of the dog, and are received both on the local level, as well as the national level (Sieger Show). Awards for beauty are listed before the dog’s official name.  Awards for working titles are listed after the dog’s official name.

Puppies up to 12 months:

Very promising (VP): The highest rating available to dogs under 1 year of age when shown at a show.

Sehr Gut or Very Good (SG): Very good structure.  It is the highest rating a dog can get in a show until it has met all the requirements listed to receive a V rating.

Gut or Good (G): This is the lowest rating a shepherd can have and still be allowed to breed in Germany.

Ausreichend or Sufficient (A)

Note: Dogs must have a Schutzhund title or other recognized working degree

How are the SV Ratings Chosen?

The letters shown in parentheses are the abbreviations used for each rating in North America. In the puppy ratings, the letters are based on the English words whereas the ratings for dogs older than 12 months are based on German terms.

At the end of judging and prior to providing the individual critiques, the judge will often begin the commentary with the number in each rating category. For example, in a class of 8 entries, the judge may award 4 times V, 3 times SG and 1 G.

About the Author: Alishia

Alishia co-owns Haus Amberg Shepherds with her husband, Patrick. Having lived and worked with shepherds in Germany for years, she has collected a pool of knowledge that she would like to share with fellow German shepherd enthusiasts.